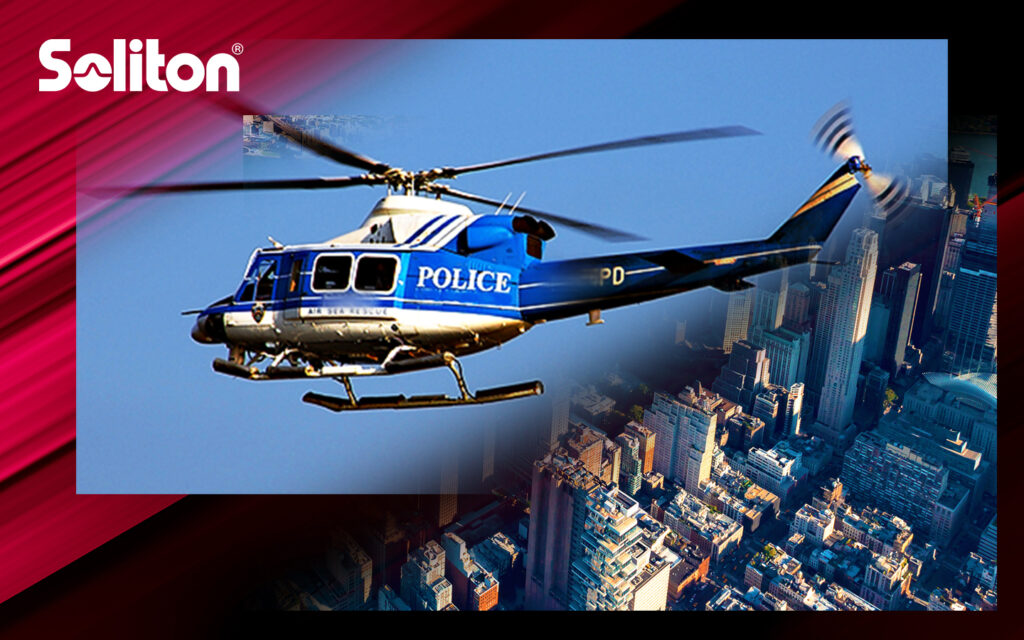 This resulted in not only repeated video streaming takes, but also increase in cost to re-run critical missions, not to mention additional fuel cost and human resources.  And when the mission is about identifying suspects on the run, or chasing a highway pursuit from above, there are no re-takes.  When it comes to mission critical video streaming, you only have one shot.

The Police department IT realized that it was time to investigate new video communication technologies, and reached out to the Soliton team, where we quickly assembled a demo unit for field testing.

The IT team wanted to try out two tests.

Our engineering team worked with the IT team to quickly enable connectivity of the Zao mobile app with Cloud View, Soliton’s cloud receiver.

This test was a success.  With the Zao mobile app, the helicopter crew streamed stable video into the cloud receiver at 800 ft above ground without any disconnection.

The next test was taking the Zao-S HEVC encoder transmitter unit into the air, where the Zao-S encoder was connected to 3 external modems using 3 different cellular network carriers.  This time, the IT team wanted to test a point-to-point connection, streaming live video to HDView, Soliton’s 1 channel decoder receiver.  For this test, the bar was raised to stream video at 1,600 ft. above ground, a significant increase from the first test.

It was 0800 hours on a crisp sunny day, when the helicopter flight crew took off with the Zao-S encoder transmitter securely connected to the helicopter’s air surveillance and reconnaissance camera.  The flight mission was 20 minutes, where the Zao-S internal battery had more than enough power for the mission (and an external battery back just in case the mission ran into overtime).

Seconds after takeoff, clear and stable real time video at 0.5 seconds latency kept streaming into the HDView receiver at 1,600 ft in the air.  And when the helicopter encountered cellular dead spots, Soliton’s RASCOW video IP protocol came to the rescue, automatically adjusting between multiple cellular networks to provide stable transmission, never to allow any disconnection.  Since the helicopter camera has multiple preset views that is consistently being switched, we purposely increased the latency to 2.5 seconds to ensure video quality when switching views.  This test was also successful and without a single glitch.

The Police IT team deemed the test a major success, thanks to Soliton’s HEVC encoding and decoding technology backed by decades of development, expertise, and experience enabling real time video streaming for public safety projects.  While this was a pleasant surprise to the Police IT team, this was no surprise to the Soliton team (because we do this all the time, and this is what we live for!)

The Zao-S encoder is an excellent fit for helicopter applications, where real time encrypted video is transmitted in real time to the Police command center, where they are recorded and archived.

This Police department was able to break away from legacy technology to utilize public 4G network in a secure way by deploying Soliton’s end-to-end encrypted video transmission encoder and decoder.  By securing using 4G network, the Police IT department was able to save massive costs without having to deploy private 4G networks.  In addition, Soliton’s video transmission technology is compatible with 5G, which makes this deployment even more attractive, where migrating to 5G will be seamless and without any additional costs or investments in new systems.